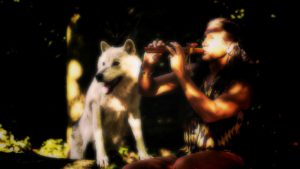 WOLFSHEART is a world renowned Native American flute player and Singer who honors Native American culture in his own style. His soulful flute music, combined with a deep respecct for the original sound and wisdom, has become a trademark across Europe. Wolfsheart’s numerous awards include three Native American Music Awards. He has recorded and toured with several musicians including such famous artists like Jose Feliciano. Having performed in Europe, South America and the USA. Wolfsheart has gathered an international following with his distinctive style and heart-filled presence. His solo recordings have touched the lives of many.

free of charge for press releases: 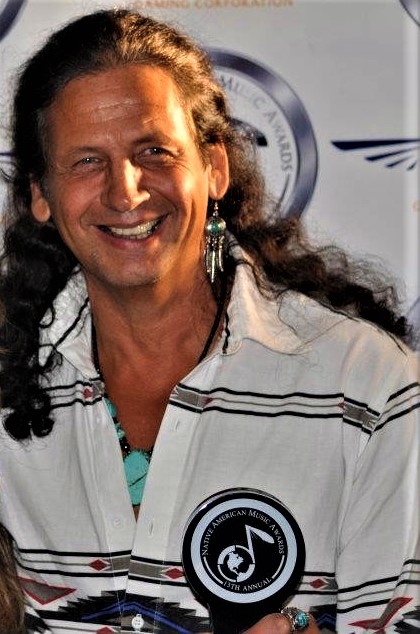 In 2013 his band Big City Indians solidify their commitment to the world’s largest environmental event “Earth Hour”; their single, “Earth Is Crying – Dry Her Tears” became the anthem for the official Earth Hour Austria.

“The Call Of The Canyons is one of the first Native American flute works that shows with great clarity the magic and mystery that surrounded the tribes of the American Southwest. Without breaking that charm, Wolfsheart joins avant-gardist sounds with the sound expressive of the Native Indian flutes, an alliance that initially may not seem wise, but the result is more than perfect. The Call Of The Canyons is a recommeded work!”… Reviewsnewage, Spain 2010

“This album is breathtaking! I feel like I’m soaring over the Grand Canyon or hoofing a sacred path. Wolfsheart has given us a “must have” collection of songs here… that flow like a high wind.. creating an atmosphere of peace, strength, and endless horizon.”
Pagan Poet Radio, US 2010

“The music on the album is a wonderful blend of ancient and modern as wood flutes and earthy drums blend with synthesizers and occasional electronic percussion. The keyboard string section gives a cinematic air and sense of drama and majesty for the flute to glide on like a hawk drifting on updrafts above the canyon. While some songs are propelled by earthy rhythms, others are soulfully meditative. All in all, a deeply felt tribute to a sacred space”…  Awareness Magazine, US 2011

“The Call of the Canyons is often tender and graceful, like two would-be lovers before their first embrace. The title song begins with a flutter, putting wings to morning’s first flight into a gentle dawn across the Southwest deserts. Gradually you begin sensing the emerging colors of canyon walls and the sounds of awakening life as the album moves into “Eagles Challenge” and “Sunrise At Four Corners.” Then the ancestors seem to speak through the bass strings and orchestral arrangements, adding the constant undertone of powerful, often bittersweet irony in “My Crow Heart (Whispering Winds of Love),” and “Ghost Rider.” And finally, the combination of piano and flute in “Kokopelli Dreams” and the slow build of melody in “Rainbow Over Canyon” portrays a beautiful synergy of hope and endurance. This is the Wolfsheart style, covering a broad range of emotions and ending with a celebration of the joyous union of Earth and Sky, love and expression. And always present is the native soul, expressed in the heartbeat of the sacred drum. This is his best album yet, sure to echo in the canyons of your heart” … Thunder Valley Drums, US 2010

“The instrumentals are clearly the main focus in this music. The Native American flute gives a breathy, wistful feeling to the music, and the great drum-work gives many of the pieces power and resonance”… Rambles Magazine, US 2011

“This music is very mellow and relaxing. It would be perfect for listening while driving home from work, giving the listeners a chance to wind down. It might also be good background music for dating or eating dinner. With its relaxing, soothing sound, it might make good falling-asleep music. It definitely would be good meditation music or something to play while doing yoga or t’ai chi. If you are a fan of the Native American flute, this CD is a must-listen, in my opinion”… Dolphinboy, Epinions US 2011