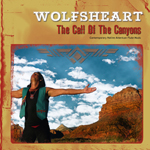 Relax with the first solo-flute-album from Wolfsheart.
“The Call Of The Canyons” is your navigator through all the beauty and the mystery of american southwest landscape.This collection of twelve songs was inspired by the canyons, the natural landscapes, the people and the soaring birds of the Southwest. It is a reflection of ancient Indian ruins, monuments, petro glyphs as well as of the teachings of Native American people of various tribes and a result of the unique collaboration between Wolfsheart and the Big City Indians’ member, composer and artist Gigi Skokan. Listen to the many sounds that echo across the crimson canyons of the Southwest.
Label: G.I.Records
Released : 2010

The Videoclip “Call Of The Canyons” was filmed at Zion Canyon and at a mysterious place known for its sliding sunsets, moon maps, and his petroglyphs. The Parowan Gap. He is culturally significant based on a collection of stories from early Native American tribes who lived here. Here we found a huge “gallery” of Native American rock art. It was a spiritual experience to be out here.

“standing on the sacred ground, it was my native heart I found…”

WHAT PEOPLE ARE SAYING ABOUT THE CD

“This album is breathtaking! I feel like I’m soaring over the Grand Canyon or hoofing a sacred path..Wolfsheart has given us a “must have” collection of songs here..that flow like a high wind.. creating an atmosphere of peace, strength, and endless horizon...”
Pagan Poet Radio

"This is Wolfsheart style, covering a broad range of emotions and ending with a celebration of the joyous union of Earth and Sky, love and expression. And always present is the native soul, expressed in the heartbeat of the sacred drum...”
Thunder Valley Drums

„Ambient melodies floating just this side of heaven. Ghostly images dancing around fires from long ago, hands raised in devotion to the Great Spirit…“
Music Beyond Words, US
Scroll back to top